Home Depot Has 9.3% Increase in Profit from Latest Quarter 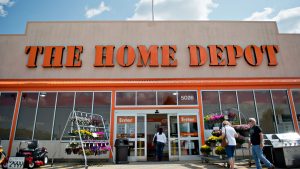 On Tuesday, Home Depot posted revenue and earnings that were mostly in line with estimates on Wall Street, as the largest retailer for home improvement in the world continued reaping the benefits of a strong U.S. housing market.

The retailer reiterated as well its guidance for sales for the full year, while raising its forecast on earnings. Shares of Home Depot were unchanged during early premarket trading Tuesday morning.

It is a strong quarter, but does not deliver on the upside that we have seen from the company the past couple of quarters, said one Wall Street senior analyst.

Home Depot posted earnings per share of $1.97, which was in line with estimates on Wall Street. Revenue was also for the most part in line coming in at $26.46 billion. Wall Street had estimates that revenue at Home Depot would be $26.48 billion.

We experience a solid three months reaching the highest sales for a quarter and net earnings in the history of the company as the housing market helps to be a strong tailwind for the business, said Craig Menear the CEO at Home Depot in a prepared statement released on Tuesday by the company.

The home improvement company said its same-store global sales increased 4.7% during the just ended quarter in comparison to a 4.8% prediction by analysts.

That showed a slight decrease in acceleration from the first three months of 2016, when its sales at same stores increased by 6.5%.

Comparable sales in the U.S. were up 5.4% in comparison with an estimate by analysts of growth of 5.2%.

Home Depot reiterated guidance for sales for its full year. The company had increased guidance following a strong three months to start the year.

Home Depot is expecting an increase of 6.3% in its revenue from last year that was $88.51 billion. It previously had said its sales growth would be from 5.1% to 6%.

Earlier in August, the Home Depot CEO said that he is expecting a strong housing market to continue fueling the growth of Home Depot.

He added that the company has had the good fortune of being in a space where its customers are willing to and do spend money.

Home Depot has gained over 3.5% since the start of 2016 through Monday trading, while its rival Lowe’s Cos has increased 7.2% during the same period.