Death Toll of Dairy Cows to Pass 30,000 in New Mexico and Texas 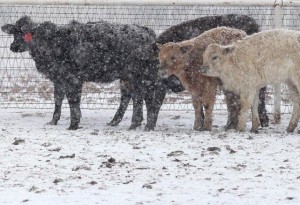 New Mexico and Texas diary producers have estimated that the death toll amongst cows during the winter storm that just passed named Goliath will surpass 30,000.

The winds are thought to be the cause of death of many of the animals. It created large drifts of snow that in some areas was 14 feet high and pushed the animals into the corners of fences where they then suffocated.

As the storm Goliath was ending over the area of the southern Plains, there were strong winds associated with the storm. The snow and the winds became sufficiently strong to create blizzard conditions that became deadly.

It was estimated by the Texas Association of Dairymen that 15,000 dairy cows had died between Friona, Muleshoe and Lubbock. That region is home to half of the top 10 counties for milk producing the state, which provide 40% of the milk in Texas.

According to one agent with New Mexico State, the state also lost more than 20,000 cattle.

Like all dairy and agriculture, its producers are always operating at Mother Nature’s mercy, said a spokesperson for the cattle company.

The most recent storm Goliath brought a brutally harsh and costly blow to the dairy producers from the thousands of deaths of their livestock to the ongoing production lost both in the immediate as well as in the future. Production is expected to be affected for a least one year.

A press release by the Texas Association of Dairymen said during the storm, the dairy employees and tankers did not reach the farms causing many hundreds of loads of previous milk to be wasted. At the same time cows not milked for two days created shortages of new milk.

Some cows that are milked twice per day went nearly two days without being milked which will have a big impact on the operating of the company.