SunEdison Said to be Preparing to File Bankruptcy 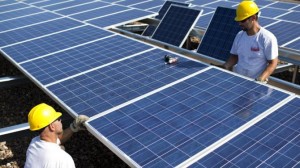 Struggling SunEdison, a solar developer, is preparing to file bankruptcy in the next few weeks, reported the Wall Street Journal on Friday. The paper cited people who had been familiar with the situation.

The shares of the company have dropped by 98% the last 12 months and fell even further in heavy trading after the news was released.

SunEdison was at one time the fastest growing developer of renewable energy in the country but is preparing for Chapter 11 bankruptcy protection.

It is negotiating with two large groups of creditors for a loan that would fund operations during the bankruptcy process reported the national newspaper.

A SunEdison spokesperson did not respond immediately to messages left requesting a comment.

The company is facing a huge shortage of cash following an aggressive acquisition strategy that has saddled it with debt of more than $12 billion.

It said in its filings that it is facing scrutiny from U.S. regulators at the Justice Department and the Securities and Exchange Commission over a deal that failed and other pertinent issues.

The creditors for the company are likely to take over control of the business and its power projects portfolio, said sources cited by the WSJ.

The paper also reported that the company has been in meetings with its creditors so it can negotiate a deal with them to get them through bankruptcy, but the completion of the deal amongst the lenders has delayed a final agreement.

Senior lenders with Deutsche Bank in the lead, form one group of lenders, while another group is composed of mostly hedge funds that focus on distressed companies that took part in a junior debt offering during January that helped to raise over $725 million.

SunEdison warned during March that it was unable to file annual financial results because of allegations that were made by some former executives that there had been incorrect disclosures about the liquidity of the company.

SunEdison received a subpoena on Thursday from the Justice Department seeking information that was related to a failed deal it had to acquire Vivint Solar and other transactions that involved TerraForm Global and TerraForm Power.