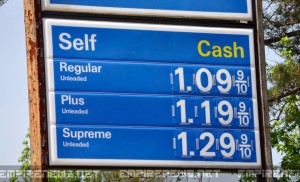 In some gasoline stations across the country, the per gallon price of regular has fallen to less than $1.42. Two organizations that track the prices of gasoline say that prices of below $2 across the U.S. will be a common occurrence.

As the price of oil falls, and capacity at refineries remains strong, the price of gasoline could fall to $1 per gallon in certain areas, a level not seen since 1999.

Gasoline prices are determined for the most part from four factors – the price of oil, proximity to the refineries, the capacity of the refinery and the state levies and taxes.

Oil prices are now under $33 per barrel and are continuing to drop. The recent Saudi Arabia decision to continue its high production rates has put an end to any control OPEC has on prices.

The decision has also forces the Gulf kingdom to cut its budget for 2016. This supply glut that is continuing guarantees there will be an oversupply of oil, while at the same time, the national economies are slowing in the biggest countries, such as China, which will lower overall demand.

China is the No. 1 importer of oil, moving ahead last year of the U.S.

The cost for producing oil from the deposits in shale, in particular in the U.S. is greater in certain cases than what the end product can be sold for.

Nonetheless, areas of this industry keep pumping, increasing the supply, while there are others that have gone or are going bankrupt since their expenses are too high to be covered by such low crude oil prices.

A number of states are home to large refineries or close to them. This is the case in the Gulf of Mexico. That makes it less expensive for many states along the Gulf to have less expensive gasoline.

Gas taxes across many states are far below the average nationally of $0.48 per gallon. In some states, the taxes are just 40 cents per gallon. South Carolina is slightly higher than 35 cents along with Oklahoma and Missouri.

The odds are increasing that the $1 per gallon threshold will be reached in the near future.