Heartland Express, Inc. (NASDAQ:HTLD – Get Rating) declared a quarterly dividend on Friday, September 16th, Zacks reports. Investors of record on Tuesday, September 27th will be given a dividend of 0.02 per share by the transportation company on Friday, October 7th. This represents a $0.08 dividend on an annualized basis and a yield of 0.57%. The ex-dividend date is Monday, September 26th.

Heartland Express (NASDAQ:HTLD – Get Rating) last posted its earnings results on Monday, July 25th. The transportation company reported $0.97 EPS for the quarter, topping analysts’ consensus estimates of $0.33 by $0.64. The business had revenue of $187.20 million during the quarter, compared to analyst estimates of $164.27 million. Heartland Express had a return on equity of 18.49% and a net margin of 21.64%. The company’s quarterly revenue was up 21.5% compared to the same quarter last year. During the same quarter last year, the company earned $0.26 EPS. Equities analysts predict that Heartland Express will post 1.83 EPS for the current fiscal year.

In other Heartland Express news, Director Michael John Sullivan acquired 2,000 shares of the stock in a transaction dated Wednesday, September 7th. The shares were acquired at an average cost of $14.28 per share, for a total transaction of $28,560.00. Following the completion of the transaction, the director now directly owns 14,902 shares of the company’s stock, valued at $212,800.56. The purchase was disclosed in a legal filing with the SEC, which is available at this hyperlink. Company insiders own 39.10% of the company’s stock.

Heartland Express, Inc, together with its subsidiaries, operates as a short-to-medium haul truckload carrier in the United States and Canada. It primarily provides nationwide asset-based dry van truckload service for shippers from Washington to Florida and New England to California; and temperature-controlled truckload services. 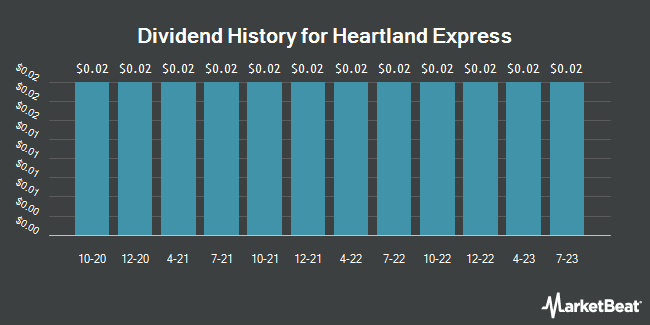 Complete the form below to receive the latest headlines and analysts' recommendations for Heartland Express with our free daily email newsletter: