Allianz Asset Management GmbH lessened its stake in Magnite, Inc. (NASDAQ:MGNI) by 5.8% in the third quarter, according to the company in its most recent disclosure with the Securities and Exchange Commission. The fund owned 5,248,779 shares of the company’s stock after selling 321,603 shares during the period. Allianz Asset Management GmbH’s holdings in Magnite were worth $146,966,000 at the end of the most recent reporting period.

In related news, Director Rachel Lam acquired 2,500 shares of Magnite stock in a transaction that occurred on Monday, December 6th. The stock was acquired at an average price of $16.15 per share, with a total value of $40,375.00. The acquisition was disclosed in a filing with the Securities & Exchange Commission, which can be accessed through the SEC website. Also, insider Adam Lee Soroca sold 20,000 shares of the company’s stock in a transaction dated Wednesday, December 1st. The shares were sold at an average price of $18.23, for a total transaction of $364,600.00. The disclosure for this sale can be found here. Corporate insiders own 4.10% of the company’s stock.

Magnite (NASDAQ:MGNI) last posted its quarterly earnings data on Wednesday, November 3rd. The company reported $0.14 earnings per share for the quarter, topping the consensus estimate of $0.09 by $0.05. The business had revenue of $131.87 million during the quarter, compared to the consensus estimate of $114.00 million. Magnite had a net margin of 1.41% and a return on equity of 5.05%. During the same quarter in the prior year, the company posted ($0.01) earnings per share. Equities analysts anticipate that Magnite, Inc. will post 0.33 EPS for the current year.

Magnite, Inc provides a technology solution to automate the purchase and sale of digital advertising inventory for buyers and sellers. It features applications and services for digital advertising sellers including websites, mobile applications, and other digital media properties. The company was founded by Frank Addante, Duc Chau, Craig Roah, Julie Mattern and Brian D.

Recommended Story: What are retained earnings?

Want to see what other hedge funds are holding MGNI? Visit HoldingsChannel.com to get the latest 13F filings and insider trades for Magnite, Inc. (NASDAQ:MGNI). 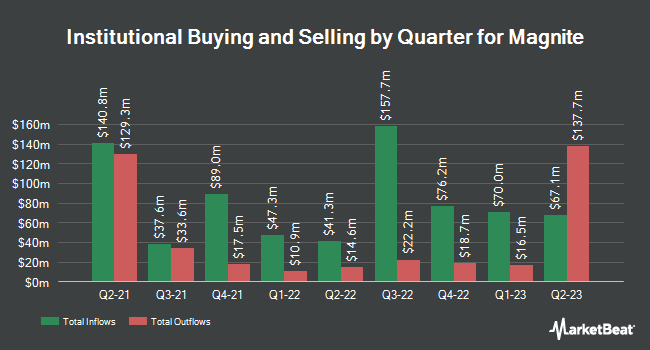 Receive News & Ratings for Magnite Daily - Enter your email address below to receive a concise daily summary of the latest news and analysts' ratings for Magnite and related companies with MarketBeat.com's FREE daily email newsletter.

Complete the form below to receive the latest headlines and analysts' recommendations for Magnite with our free daily email newsletter: