United Airlines (NASDAQ:UAL) had its price objective trimmed by Barclays from $58.00 to $52.00 in a research note released on Friday, The Fly reports. The firm currently has an equal weight rating on the transportation company’s stock.

United Airlines (NASDAQ:UAL) last released its earnings results on Monday, October 18th. The transportation company reported ($1.02) earnings per share (EPS) for the quarter, beating analysts’ consensus estimates of ($1.65) by $0.63. United Airlines had a negative net margin of 16.19% and a negative return on equity of 112.46%. The company had revenue of $7.75 billion for the quarter, compared to the consensus estimate of $7.64 billion. During the same period in the prior year, the company posted ($8.16) EPS. The company’s revenue was up 211.4% compared to the same quarter last year. Research analysts expect that United Airlines will post -14.54 EPS for the current fiscal year.

United Airlines Holdings, Inc is a holding company, which offers satellite based Wi-Fi, including on long-haul overseas routes. It transports people and cargo throughout North America and to destinations in Asia, Europe, Africa, the Pacific, the Middle East and Latin America. UAL, through United and its regional carriers.

Read More: What Is Dividend Yield and How Do You Calculate It? 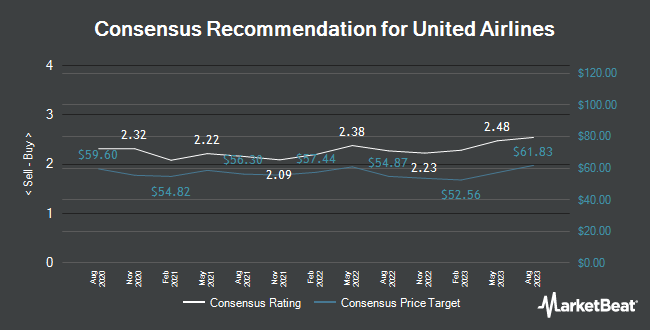 Complete the form below to receive the latest headlines and analysts' recommendations for United Airlines with our free daily email newsletter: