Lord Abbett & CO. LLC boosted its holdings in The Shyft Group, Inc. (NASDAQ:SHYF) by 26.3% in the 3rd quarter, according to its most recent filing with the Securities & Exchange Commission. The institutional investor owned 658,943 shares of the company’s stock after purchasing an additional 137,010 shares during the quarter. Lord Abbett & CO. LLC owned 1.86% of The Shyft Group worth $25,046,000 at the end of the most recent reporting period.

SHYF has been the subject of several research analyst reports. DA Davidson boosted their price objective on shares of The Shyft Group from $50.00 to $55.00 and gave the company a “buy” rating in a research report on Friday, November 5th. Zacks Investment Research downgraded The Shyft Group from a “buy” rating to a “hold” rating in a research report on Thursday, January 6th.

The Shyft Group (NASDAQ:SHYF) last issued its earnings results on Thursday, November 4th. The company reported $0.63 earnings per share for the quarter, topping the Zacks’ consensus estimate of $0.54 by $0.09. The business had revenue of $272.60 million during the quarter, compared to the consensus estimate of $247.60 million. The Shyft Group had a return on equity of 26.54% and a net margin of 6.33%. The firm’s revenue for the quarter was up 34.0% on a year-over-year basis. During the same period in the previous year, the company posted $0.57 earnings per share. As a group, analysts predict that The Shyft Group, Inc. will post 1.82 EPS for the current year.

The company also recently announced a quarterly dividend, which was paid on Thursday, December 16th. Investors of record on Tuesday, November 16th were issued a $0.025 dividend. This represents a $0.10 dividend on an annualized basis and a dividend yield of 0.21%. The ex-dividend date was Monday, November 15th. The Shyft Group’s dividend payout ratio is currently 6.45%.

The Shyft Group, Inc engages in vehicle manufacturing and assembly for the commercial and retail vehicle industries as well as for the emergency response and recreational vehicle markets. It operates through the Fleet Vehicles and Services, and Specialty Vehicles segments. The Fleet Vehicles and Services segment manufactures commercial vehicles used in the e-commerce/last mile/parcel delivery, beverage and grocery delivery, mobile retail, and trades and construction industries.

See Also: What is a Roth IRA? 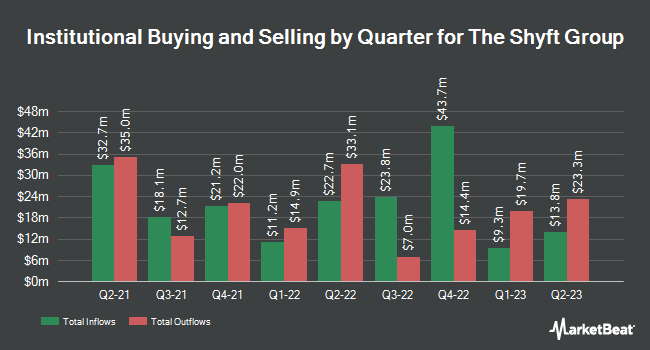 $485.66 Million in Sales Expected for Toast, Inc This Quarter

Complete the form below to receive the latest headlines and analysts' recommendations for The Shyft Group with our free daily email newsletter: