Russell Investments Group Ltd. cut its holdings in shares of Switch, Inc. (NYSE:SWCH) by 34.4% during the third quarter, according to its most recent Form 13F filing with the Securities and Exchange Commission (SEC). The firm owned 335,279 shares of the company’s stock after selling 175,821 shares during the period. Russell Investments Group Ltd. owned about 0.14% of Switch worth $8,510,000 as of its most recent SEC filing.

Switch (NYSE:SWCH) last released its quarterly earnings data on Thursday, November 4th. The company reported $0.01 earnings per share (EPS) for the quarter, missing the Thomson Reuters’ consensus estimate of $0.04 by ($0.03). The business had revenue of $158.10 million during the quarter, compared to analysts’ expectations of $159.58 million. Switch had a return on equity of 3.90% and a net margin of 3.95%. The company’s revenue was up 22.8% compared to the same quarter last year. During the same quarter in the previous year, the company posted $0.05 EPS. Analysts anticipate that Switch, Inc. will post 0.17 earnings per share for the current fiscal year.

The firm also recently disclosed a quarterly dividend, which was paid on Wednesday, December 1st. Shareholders of record on Friday, November 19th were given a $0.052 dividend. This represents a $0.21 annualized dividend and a yield of 0.81%. The ex-dividend date was Thursday, November 18th. Switch’s payout ratio is 123.53%.

Switch, Inc (Nevada) engages in the provision of technology infrastructure. It specializes in the development of digital platforms for digital media companies, cloud and managed service providers, financial institutions, and telecommunications providers. The firm’s products include Switch CONNECT and Switch SAFE. 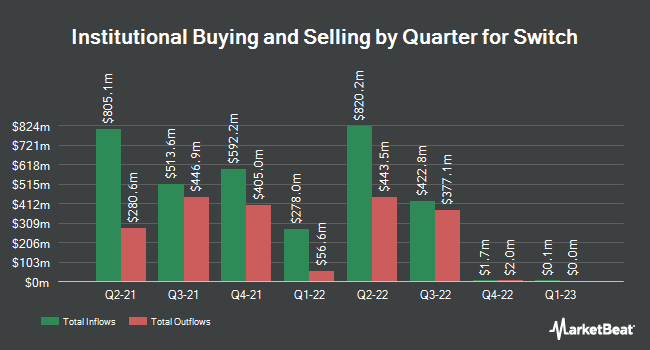 Receive News & Ratings for Switch Daily - Enter your email address below to receive a concise daily summary of the latest news and analysts' ratings for Switch and related companies with MarketBeat.com's FREE daily email newsletter.

Complete the form below to receive the latest headlines and analysts' recommendations for Switch with our free daily email newsletter: