According to Zacks, analysts expect that Adverum Biotechnologies will report full year earnings of ($1.58) per share for the current year, with EPS estimates ranging from ($1.62) to ($1.55). For the next financial year, analysts anticipate that the business will report earnings of ($1.48) per share, with EPS estimates ranging from ($1.75) to ($1.30). Zacks Investment Research’s earnings per share calculations are a mean average based on a survey of research analysts that follow Adverum Biotechnologies.

Adverum Biotechnologies (NASDAQ:ADVM) last released its earnings results on Thursday, November 4th. The biotechnology company reported ($0.39) earnings per share (EPS) for the quarter, missing the Zacks’ consensus estimate of ($0.38) by ($0.01).

In related news, Director James Paul Scopa sold 50,000 shares of the stock in a transaction dated Monday, November 15th. The shares were sold at an average price of $2.18, for a total transaction of $109,000.00. The transaction was disclosed in a document filed with the Securities & Exchange Commission, which is accessible through this hyperlink. 12.40% of the stock is currently owned by corporate insiders.

Adverum Biotechnologies, Inc is a clinical-stage gene therapy company that engages in the development of gene therapies for ocular and rare diseases. The company was founded by Mark S. Blumenkranz, Thomas W. Chalberg, Jr., Mitchell H. Finer, and Steven Daniel Schwartz on July 17, 2006 and is headquartered in Redwood City, CA. 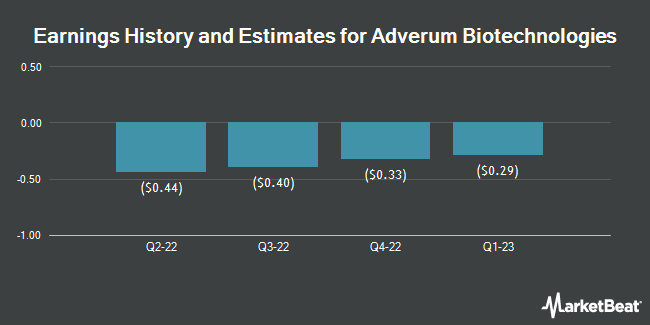 Central Puerto Shares Gap Up to $3.26

Complete the form below to receive the latest headlines and analysts' recommendations for Adverum Biotechnologies with our free daily email newsletter: