According to Zacks, analysts expect that Crown Castle International will report full year sales of $6.31 billion for the current year, with estimates ranging from $6.26 billion to $6.33 billion. For the next financial year, analysts expect that the business will report sales of $6.64 billion, with estimates ranging from $6.52 billion to $6.76 billion. Zacks Investment Research’s sales calculations are an average based on a survey of research firms that follow Crown Castle International.

Crown Castle International (NYSE:CCI) last posted its quarterly earnings data on Tuesday, October 19th. The real estate investment trust reported $0.81 EPS for the quarter, topping analysts’ consensus estimates of $0.76 by $0.05. Crown Castle International had a net margin of 21.27% and a return on equity of 14.75%. The firm had revenue of $1.45 billion during the quarter, compared to analyst estimates of $1.62 billion. During the same quarter last year, the business posted $1.56 EPS. The company’s revenue was up 8.4% on a year-over-year basis.

In other Crown Castle International news, Director Kevin A. Stephens acquired 1,110 shares of the company’s stock in a transaction that occurred on Wednesday, October 27th. The stock was acquired at an average price of $178.66 per share, for a total transaction of $198,312.60. The transaction was disclosed in a document filed with the SEC, which is available through this hyperlink. 0.45% of the stock is owned by company insiders.

The business also recently declared a quarterly dividend, which will be paid on Friday, December 31st. Stockholders of record on Wednesday, December 15th will be paid a $1.47 dividend. This is an increase from Crown Castle International’s previous quarterly dividend of $1.33. This represents a $5.88 dividend on an annualized basis and a dividend yield of 3.25%. The ex-dividend date is Tuesday, December 14th. Crown Castle International’s dividend payout ratio (DPR) is presently 175.58%.

Crown Castle International Corp. is a real estate investment trust company, which engages in the provision of access to wireless infrastructure via long-term contacts. It operates through the following segments: Towers and Fiber. The Towers segment offers access, including space or capacity towers dispersed throughout the United States.

Featured Article: What is insider trading? 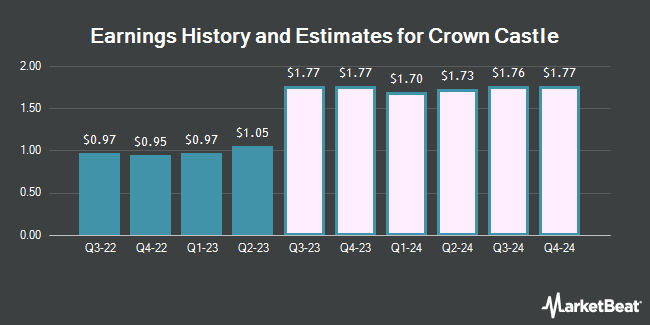 Complete the form below to receive the latest headlines and analysts' recommendations for Crown Castle International with our free daily email newsletter: