According to Zacks, analysts expect that Phillips 66 Partners will report full-year sales of $1.61 billion for the current financial year, with estimates ranging from $1.55 billion to $1.66 billion. For the next year, analysts expect that the firm will report sales of $1.70 billion, with estimates ranging from $1.63 billion to $1.76 billion. Zacks’ sales averages are a mean average based on a survey of research firms that that provide coverage for Phillips 66 Partners.

Phillips 66 Partners (NYSE:PSXP) last issued its quarterly earnings data on Monday, August 2nd. The oil and gas company reported $0.91 earnings per share (EPS) for the quarter, beating the Zacks’ consensus estimate of $0.88 by $0.03. Phillips 66 Partners had a return on equity of 35.09% and a net margin of 32.66%. The company had revenue of $423.00 million during the quarter, compared to analysts’ expectations of $394.73 million. During the same period last year, the business earned $1.05 earnings per share. The business’s revenue was down 1.6% on a year-over-year basis.

The company also recently announced a quarterly dividend, which was paid on Friday, August 13th. Shareholders of record on Friday, July 30th were given a $0.875 dividend. The ex-dividend date was Thursday, July 29th. This represents a $3.50 annualized dividend and a yield of 8.91%. Phillips 66 Partners’s dividend payout ratio is presently 97.77%.

Phillips 66 Partners LP engages in the ownership, operation, development, and acquisition of crude oil, refined petroleum product and natural gas liquids pipelines and terminals, and other transportation and midstream assets. It also provides terminals and storages for oil and petroleum products. The company was founded on February 20, 2013 and is headquartered in Houston, TX.

Featured Story: What is Depreciation? 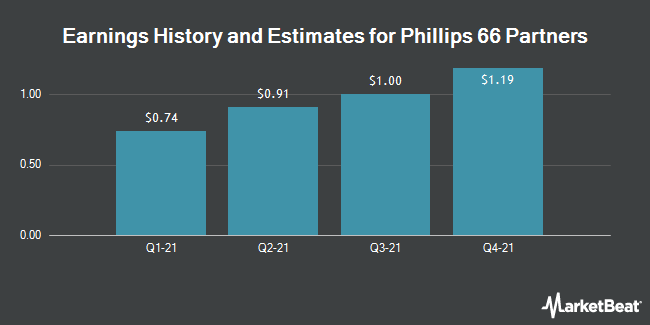 Bank of Montreal Can Has $2.96 Million Position in Inovalon Holdings, Inc.

Bank of Montreal Can Buys 18,467 Shares of Herman Miller, Inc.

Complete the form below to receive the latest headlines and analysts' recommendations for Phillips 66 Partners with our free daily email newsletter: