Affinity Asset Advisors LLC purchased a new stake in iTeos Therapeutics, Inc. (NASDAQ:ITOS) in the 2nd quarter, according to its most recent disclosure with the Securities & Exchange Commission. The fund purchased 25,000 shares of the company’s stock, valued at approximately $641,000. Affinity Asset Advisors LLC owned approximately 0.07% of iTeos Therapeutics at the end of the most recent quarter.

iTeos Therapeutics (NASDAQ:ITOS) last announced its quarterly earnings results on Thursday, August 12th. The company reported ($0.75) earnings per share for the quarter, missing the Thomson Reuters’ consensus estimate of ($0.41) by ($0.34). As a group, equities research analysts expect that iTeos Therapeutics, Inc. will post 3.22 EPS for the current year.

A number of research analysts have weighed in on ITOS shares. Zacks Investment Research cut shares of iTeos Therapeutics from a “hold” rating to a “sell” rating in a research note on Wednesday. SVB Leerink dropped their price target on shares of iTeos Therapeutics from $56.00 to $55.00 and set an “outperform” rating on the stock in a research note on Friday, August 13th.

Iteos Therapeutics, Inc, a clinical-stage biopharmaceutical company, engages in the discovery and development of immuno-oncology therapeutics for patients. The company's product pipeline includes inupadenant, a small molecule antagonist of the adenosine A2a receptor that is an open-label Phase 1/2a clinical trial in adult patients; and EOS-448, an antagonist of TIGIT or T-cell immunoreceptor with Ig and ITIM domains, which is in Phase 1/2a clinical trial, as well as used to engage the Fc gamma receptor, or Fc?R to activate dendritic cells and macrophages and to promote antibody-dependent cellular cytotoxicity, or ADCC activity.

Want to see what other hedge funds are holding ITOS? Visit HoldingsChannel.com to get the latest 13F filings and insider trades for iTeos Therapeutics, Inc. (NASDAQ:ITOS). 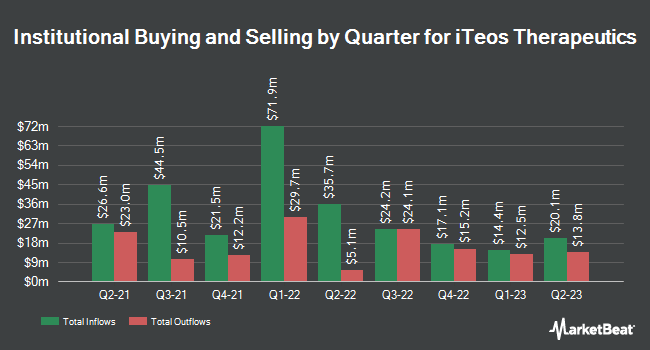 Complete the form below to receive the latest headlines and analysts' recommendations for iTeos Therapeutics with our free daily email newsletter: