Shares of AbbVie Inc. (NYSE:ABBV) have been assigned an average recommendation of “Buy” from the seventeen brokerages that are presently covering the stock, MarketBeat.com reports. One analyst has rated the stock with a sell recommendation, two have given a hold recommendation and thirteen have issued a buy recommendation on the company. The average twelve-month target price among brokers that have issued ratings on the stock in the last year is $123.47.

AbbVie (NYSE:ABBV) last announced its quarterly earnings data on Thursday, July 29th. The company reported $3.11 EPS for the quarter, beating the Thomson Reuters’ consensus estimate of $3.09 by $0.02. AbbVie had a net margin of 12.40% and a return on equity of 154.24%. The firm had revenue of $13.96 billion during the quarter, compared to analysts’ expectations of $13.64 billion. During the same quarter last year, the business earned $2.34 earnings per share. The business’s revenue for the quarter was up 33.9% compared to the same quarter last year. As a group, equities analysts forecast that AbbVie will post 12.64 earnings per share for the current year.

The company also recently declared a quarterly dividend, which will be paid on Monday, November 15th. Shareholders of record on Friday, October 15th will be paid a $1.30 dividend. This represents a $5.20 dividend on an annualized basis and a yield of 4.82%. The ex-dividend date is Thursday, October 14th. AbbVie’s dividend payout ratio is currently 49.24%.

In other AbbVie news, SVP Carrie C. Strom sold 5,057 shares of the business’s stock in a transaction that occurred on Monday, August 23rd. The stock was sold at an average price of $120.00, for a total transaction of $606,840.00. Following the transaction, the senior vice president now owns 11,595 shares of the company’s stock, valued at $1,391,400. The sale was disclosed in a document filed with the SEC, which is available through this link. Company insiders own 0.09% of the company’s stock.

AbbVie, Inc is a research-based biopharmaceutical company, which engages in the development and sale of pharmaceutical products. It focuses on treating conditions such as chronic autoimmune diseases in rheumatology, gastroenterology, and dermatology; oncology, including blood cancers; virology, including hepatitis C virus (HCV) and human immunodeficiency virus (HIV); neurological disorders, such as Parkinson’s disease; metabolic diseases, comprising thyroid disease and complications associated with cystic fibrosis; pain associated with endometriosis; and other serious health conditions. 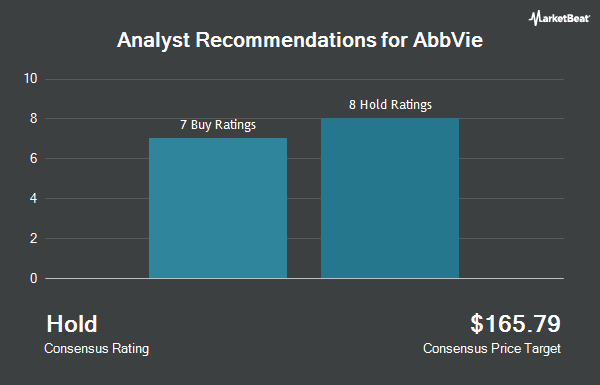 Receive News & Ratings for AbbVie Daily - Enter your email address below to receive a concise daily summary of the latest news and analysts' ratings for AbbVie and related companies with MarketBeat.com's FREE daily email newsletter.

Karbo Price Down 9.2% This Week

Pembina Pipeline Co. Given Consensus Recommendation of “Hold” by Analysts

$60.95 Million in Sales Expected for Health Catalyst, Inc. This Quarter

SushiSwap Price Down 6.4% Over Last Week

Complete the form below to receive the latest headlines and analysts' recommendations for AbbVie with our free daily email newsletter: