Myriad Genetics, Inc. (NASDAQ:MYGN) insider Jayne B. Hart sold 67,446 shares of the firm’s stock in a transaction that occurred on Friday, September 17th. The stock was sold at an average price of $33.72, for a total transaction of $2,274,279.12. The transaction was disclosed in a legal filing with the Securities & Exchange Commission, which is available through the SEC website.

Myriad Genetics (NASDAQ:MYGN) last released its quarterly earnings results on Tuesday, August 3rd. The company reported $0.12 EPS for the quarter, beating the Thomson Reuters’ consensus estimate of ($0.09) by $0.21. The firm had revenue of $189.40 million for the quarter, compared to analyst estimates of $163.09 million. Myriad Genetics had a negative net margin of 15.64% and a negative return on equity of 4.29%. The business’s revenue for the quarter was up 103.2% compared to the same quarter last year. During the same quarter in the previous year, the company earned ($0.31) EPS. On average, sell-side analysts forecast that Myriad Genetics, Inc. will post -0.42 EPS for the current fiscal year.

Myriad Genetics, Inc engages in the discovery, development, and marketing of transformative molecular diagnostic test. It operates through the Diagnostics and Other segments. The Diagnostics segment provides testing and collaborative development of testing that is designed to asses an individual’s risk of developing a disease later in life.

Read More: How is inflation measured? 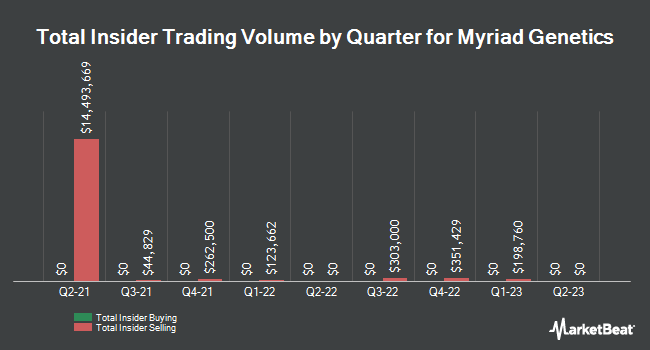 Arepacoin Trading Down 12.2% Over Last Week

Complete the form below to receive the latest headlines and analysts' recommendations for Myriad Genetics with our free daily email newsletter: