Russell Investments Group Ltd. lifted its stake in Gannett Co., Inc. (NYSE:GCI) by 675.1% during the second quarter, according to the company in its most recent Form 13F filing with the SEC. The fund owned 108,308 shares of the company’s stock after acquiring an additional 94,335 shares during the quarter. Russell Investments Group Ltd. owned approximately 0.08% of Gannett worth $593,000 as of its most recent SEC filing.

In other news, Director Laurence Tarica acquired 26,000 shares of Gannett stock in a transaction dated Tuesday, September 14th. The stock was bought at an average price of $6.42 per share, for a total transaction of $166,920.00. Following the completion of the acquisition, the director now directly owns 550,263 shares in the company, valued at approximately $3,532,688.46. The transaction was disclosed in a legal filing with the SEC, which is accessible through this link. Insiders own 2.40% of the company’s stock.

Gannett (NYSE:GCI) last announced its quarterly earnings results on Thursday, August 5th. The company reported $0.10 earnings per share for the quarter, topping analysts’ consensus estimates of ($0.36) by $0.46. The firm had revenue of $804.28 million for the quarter, compared to the consensus estimate of $796.20 million. Gannett had a negative return on equity of 9.65% and a negative net margin of 8.58%. During the same quarter in the previous year, the business earned ($3.32) earnings per share. As a group, research analysts anticipate that Gannett Co., Inc. will post 0.55 EPS for the current fiscal year.

Further Reading: How to execute a trade ex-dividend strategy?

Want to see what other hedge funds are holding GCI? Visit HoldingsChannel.com to get the latest 13F filings and insider trades for Gannett Co., Inc. (NYSE:GCI). 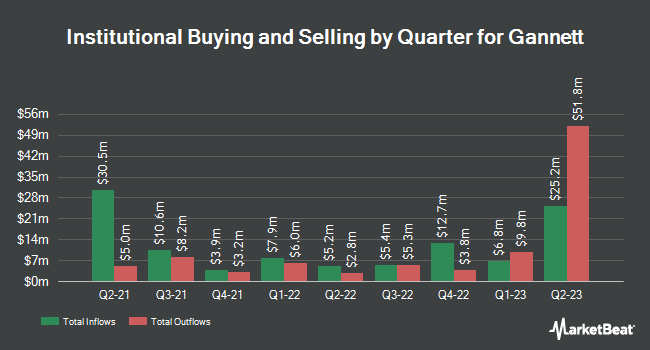 Receive News & Ratings for Gannett Daily - Enter your email address below to receive a concise daily summary of the latest news and analysts' ratings for Gannett and related companies with MarketBeat.com's FREE daily email newsletter.

Ontario Teachers Pension Plan Board Has $556,000 Position in The Allstate Co.

SmartCash Price Up 0.5% This Week

Complete the form below to receive the latest headlines and analysts' recommendations for Gannett with our free daily email newsletter: