Ramius Advisors LLC bought a new position in ORBCOMM Inc. (NASDAQ:ORBC) in the second quarter, according to its most recent Form 13F filing with the Securities and Exchange Commission. The institutional investor bought 281,007 shares of the technology company’s stock, valued at approximately $3,159,000. ORBCOMM makes up about 1.2% of Ramius Advisors LLC’s holdings, making the stock its 12th largest holding.

Separately, Zacks Investment Research lowered ORBCOMM from a “buy” rating to a “hold” rating in a research report on Tuesday, July 20th. One investment analyst has rated the stock with a sell rating and five have given a hold rating to the company. Based on data from MarketBeat, the company has an average rating of “Hold” and an average price target of $11.25.

ORBCOMM (NASDAQ:ORBC) last announced its quarterly earnings data on Tuesday, August 3rd. The technology company reported ($0.10) EPS for the quarter, missing the Zacks’ consensus estimate of ($0.05) by ($0.05). ORBCOMM had a negative net margin of 15.10% and a negative return on equity of 8.21%. The firm had revenue of $65.93 million during the quarter, compared to the consensus estimate of $65.82 million. On average, equities analysts expect that ORBCOMM Inc. will post -0.17 earnings per share for the current fiscal year.

ORBCOMM, Inc engages in the provision of network connectivity, devices, device management, and web reporting applications. Its products are designed to track, monitor, control and enhance security for a variety of assets, such as heavy equipment; fixed asset monitoring; government and homeland security; and in industries for manufacturing, warehousing, and supply chain management.

Want to see what other hedge funds are holding ORBC? Visit HoldingsChannel.com to get the latest 13F filings and insider trades for ORBCOMM Inc. (NASDAQ:ORBC). 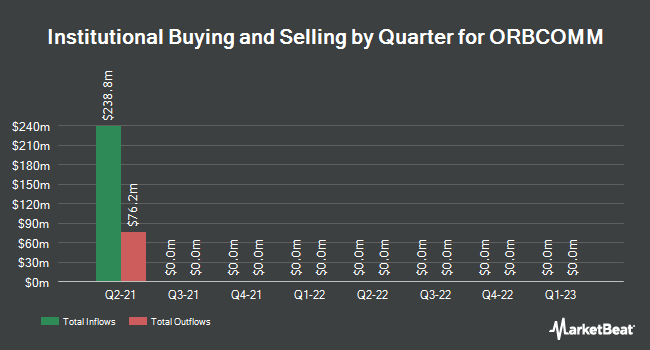 Receive News & Ratings for ORBCOMM Daily - Enter your email address below to receive a concise daily summary of the latest news and analysts' ratings for ORBCOMM and related companies with MarketBeat.com's FREE daily email newsletter.

Atmos Energy Co. Given Consensus Rating of “Buy” by Brokerages

Complete the form below to receive the latest headlines and analysts' recommendations for ORBCOMM with our free daily email newsletter: