PNC Financial Services Group Inc. raised its holdings in Grifols, S.A. (NASDAQ:GRFS) by 18.6% during the second quarter, according to the company in its most recent Form 13F filing with the SEC. The firm owned 7,494 shares of the biotechnology company’s stock after purchasing an additional 1,177 shares during the quarter. PNC Financial Services Group Inc.’s holdings in Grifols were worth $129,000 as of its most recent filing with the SEC.

Grifols (NASDAQ:GRFS) last announced its quarterly earnings results on Thursday, July 29th. The biotechnology company reported $0.35 earnings per share (EPS) for the quarter, beating the consensus estimate of $0.27 by $0.08. Grifols had a net margin of 12.71% and a return on equity of 9.98%. The company had revenue of $1.63 billion for the quarter. On average, equities research analysts expect that Grifols, S.A. will post 1.17 earnings per share for the current year.

Grifols SA engages in the production of plasma derivatives. It operates through the following segments: Bioscience, Hospital, Diagnostic, Bio Supplies, and Others. The Bioscience Segment includes all activities related with products deriving from human plasma for therapeutic use. The Hospital Segment comprises of all non-biological pharmaceutical products and medical supplies manufactured by group companies earmarked for hospital pharmacy.

Further Reading: What is the Stochastic Momentum Index (SMI)? 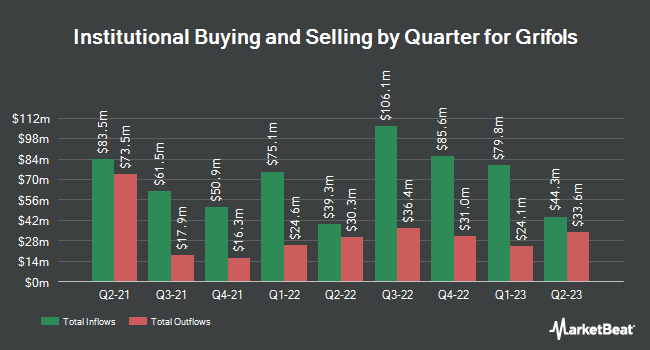 Receive News & Ratings for Grifols Daily - Enter your email address below to receive a concise daily summary of the latest news and analysts' ratings for Grifols and related companies with MarketBeat.com's FREE daily email newsletter.

Complete the form below to receive the latest headlines and analysts' recommendations for Grifols with our free daily email newsletter: