Wall Street analysts expect SFL Co. Ltd. (NYSE:SFL) to report $124.72 million in sales for the current fiscal quarter, according to Zacks. Two analysts have provided estimates for SFL’s earnings, with the highest sales estimate coming in at $133.28 million and the lowest estimate coming in at $116.15 million. SFL reported sales of $115.77 million in the same quarter last year, which indicates a positive year over year growth rate of 7.7%. The business is scheduled to report its next quarterly earnings results on Friday, November 12th.

On average, analysts expect that SFL will report full-year sales of $480.37 million for the current fiscal year, with estimates ranging from $468.42 million to $492.31 million. For the next fiscal year, analysts forecast that the business will post sales of $507.95 million, with estimates ranging from $485.60 million to $530.29 million. Zacks’ sales averages are a mean average based on a survey of analysts that that provide coverage for SFL.

SFL (NYSE:SFL) last posted its quarterly earnings results on Thursday, August 19th. The shipping company reported $0.16 earnings per share (EPS) for the quarter, missing the Thomson Reuters’ consensus estimate of $0.19 by ($0.03). The firm had revenue of $116.80 million for the quarter, compared to the consensus estimate of $112.69 million. SFL had a positive return on equity of 9.91% and a negative net margin of 21.52%. The business’s revenue was down 1.4% compared to the same quarter last year. During the same period last year, the company posted $0.11 earnings per share.

SFL Corp. Ltd. engages in the ownership and operation of vessels and offshore related assets. It also involves in the charter, purchase, and sale of assets. It operate through subsidiaries located in Bermuda, Cyprus, Malta, Liberia, Norway, the United Kingdom, and the Marshall Islands. The company was founded on October 10, 2003 and is headquartered in Hamilton, Bermuda. 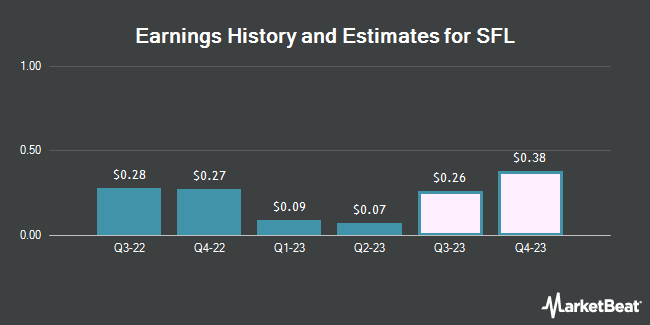 Receive News & Ratings for SFL Daily - Enter your email address below to receive a concise daily summary of the latest news and analysts' ratings for SFL and related companies with MarketBeat.com's FREE daily email newsletter.

RioDeFi Price Down 4.3% Over Last Week

Complete the form below to receive the latest headlines and analysts' recommendations for SFL with our free daily email newsletter: