Wall Street brokerages expect FireEye, Inc. (NASDAQ:FEYE) to announce $120.36 million in sales for the current quarter, Zacks Investment Research reports. Three analysts have made estimates for FireEye’s earnings, with estimates ranging from $119.09 million to $122.00 million. FireEye reported sales of $238.46 million during the same quarter last year, which would suggest a negative year-over-year growth rate of 49.5%. The business is scheduled to report its next earnings results on Tuesday, October 26th.

On average, analysts expect that FireEye will report full-year sales of $694.53 million for the current financial year, with estimates ranging from $470.88 million to $1.02 billion. For the next fiscal year, analysts expect that the firm will report sales of $784.90 million, with estimates ranging from $559.77 million to $1.11 billion. Zacks’ sales calculations are a mean average based on a survey of sell-side research firms that cover FireEye.

FireEye (NASDAQ:FEYE) last posted its earnings results on Thursday, August 5th. The information security company reported $0.09 earnings per share (EPS) for the quarter, topping the Thomson Reuters’ consensus estimate of ($0.09) by $0.18. FireEye had a negative net margin of 22.83% and a negative return on equity of 9.57%.

FireEye, Inc operates as an intelligence-led security company. The firm engages in intelligence-based cybersecurity solutions that allow organizations to prepare for, prevent, respond to and remediate cyber attacks. It operates through the following geographical segments: United States; EMEA; APAC; and Other. 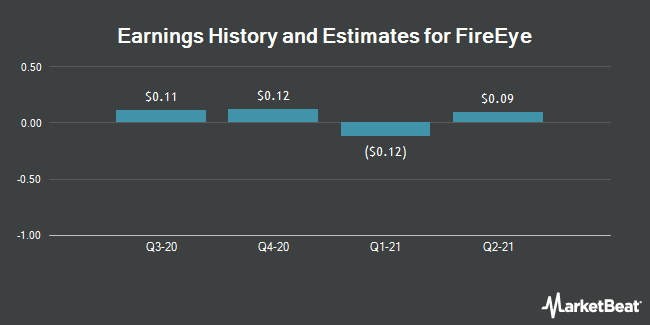 Receive News & Ratings for FireEye Daily - Enter your email address below to receive a concise daily summary of the latest news and analysts' ratings for FireEye and related companies with MarketBeat.com's FREE daily email newsletter.

SeChain Trading Down 14% This Week

MimbleWimbleCoin Price Up 4.7% This Week

Complete the form below to receive the latest headlines and analysts' recommendations for FireEye with our free daily email newsletter: