Wall Street brokerages expect Lincoln National Co. (NYSE:LNC) to report $4.77 billion in sales for the current quarter, Zacks reports. Two analysts have provided estimates for Lincoln National’s earnings. The highest sales estimate is $4.87 billion and the lowest is $4.66 billion. Lincoln National reported sales of $4.79 billion in the same quarter last year, which would suggest a negative year over year growth rate of 0.4%. The business is scheduled to announce its next earnings report on Wednesday, November 3rd.

On average, analysts expect that Lincoln National will report full-year sales of $19.21 billion for the current year, with estimates ranging from $18.94 billion to $19.42 billion. For the next fiscal year, analysts anticipate that the firm will post sales of $19.75 billion, with estimates ranging from $19.60 billion to $19.88 billion. Zacks Investment Research’s sales calculations are a mean average based on a survey of research analysts that follow Lincoln National.

Lincoln National (NYSE:LNC) last posted its earnings results on Wednesday, August 4th. The financial services provider reported $3.17 earnings per share (EPS) for the quarter, topping the Zacks’ consensus estimate of $2.30 by $0.87. The firm had revenue of $4.85 billion during the quarter, compared to the consensus estimate of $4.79 billion. Lincoln National had a net margin of 7.43% and a return on equity of 5.47%. The company’s revenue was up 37.9% on a year-over-year basis. During the same quarter in the prior year, the company earned $0.97 EPS.

Lincoln National Corp. is a holding company, which operates multiple insurance and retirement businesses through its subsidiary companies. It provides advice and solutions that help empower people to take charge of their financial lives with confidence and optimism. The company operates through the following segments: Annuities, Retirement Plan Services, Life Insurance, Group Protection, and Other Operations. 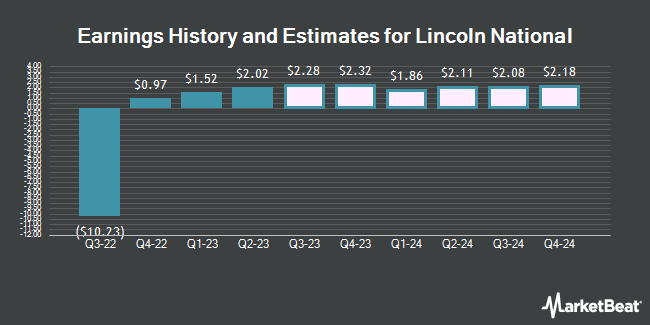 Odyssey Price Down 2.3% Over Last Week

Complete the form below to receive the latest headlines and analysts' recommendations for Lincoln National with our free daily email newsletter: