Wall Street analysts expect South State Co. (NASDAQ:SSB) to report $359.90 million in sales for the current quarter, according to Zacks Investment Research. Four analysts have made estimates for South State’s earnings. The highest sales estimate is $370.80 million and the lowest is $353.50 million. South State reported sales of $216.90 million in the same quarter last year, which suggests a positive year over year growth rate of 65.9%. The firm is scheduled to report its next earnings report on Thursday, July 29th.

According to Zacks, analysts expect that South State will report full-year sales of $1.44 billion for the current fiscal year, with estimates ranging from $1.42 billion to $1.45 billion. For the next financial year, analysts anticipate that the business will report sales of $1.41 billion, with estimates ranging from $1.40 billion to $1.42 billion. Zacks Investment Research’s sales calculations are a mean average based on a survey of sell-side research analysts that that provide coverage for South State.

South State (NASDAQ:SSB) last announced its earnings results on Wednesday, April 28th. The bank reported $2.17 earnings per share (EPS) for the quarter, beating the Thomson Reuters’ consensus estimate of $1.42 by $0.75. South State had a return on equity of 8.88% and a net margin of 17.34%. The business had revenue of $358.28 million during the quarter, compared to analyst estimates of $360.90 million. During the same quarter in the previous year, the business earned $0.82 earnings per share. The company’s revenue for the quarter was up 108.1% compared to the same quarter last year.

A number of analysts recently issued reports on the company. Truist boosted their price target on South State from $85.00 to $97.00 in a report on Monday, March 8th. Zacks Investment Research upgraded South State from a “hold” rating to a “buy” rating and set a $94.00 price target for the company in a report on Tuesday, May 4th. Three research analysts have rated the stock with a hold rating and three have issued a buy rating to the company’s stock. The stock currently has a consensus rating of “Buy” and a consensus target price of $79.40.

The firm also recently disclosed a quarterly dividend, which was paid on Friday, May 21st. Investors of record on Friday, May 14th were paid a $0.47 dividend. This represents a $1.88 dividend on an annualized basis and a yield of 2.20%. The ex-dividend date was Thursday, May 13th. South State’s dividend payout ratio (DPR) is 36.72%. 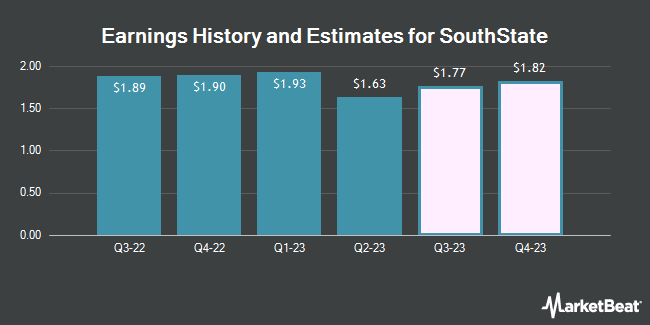 Crystal Token Trading Down 17.3% This Week

Complete the form below to receive the latest headlines and analysts' recommendations for South State with our free daily email newsletter: