Chewy (NYSE:CHWY) was downgraded by Zacks Investment Research from a “buy” rating to a “hold” rating in a research report issued on Wednesday, Zacks.com reports.

According to Zacks, “Chewy Inc. operates as an online pet retailer. The Company offers pet products which include dry and wet food, toys, mats, biscuits, vitamins and supplements. Chewy Inc. is based in Dania Beach, United States. “

Chewy (NYSE:CHWY) last released its quarterly earnings data on Monday, March 29th. The company reported $0.05 earnings per share for the quarter, beating the consensus estimate of ($0.10) by $0.15. The business had revenue of $2.04 billion during the quarter, compared to analyst estimates of $1.96 billion. Equities analysts expect that Chewy will post 0.2 earnings per share for the current fiscal year.

Chewy, Inc, together with its subsidiaries, engages in the pure play e-commerce business in the United States. The company provides pet food and treats, pet supplies and pet medications, and other pet-health products, as well as pet services for dogs, cats, fish, birds, small pets, horses, and reptiles through its chewy.com retail Website, as well as its mobile applications.

Further Reading: What is cost of equity? 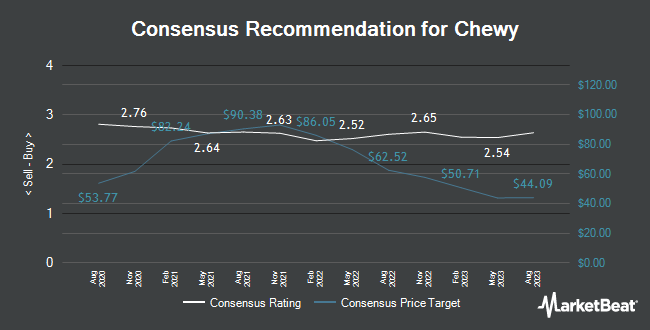 Receive News & Ratings for Chewy Daily - Enter your email address below to receive a concise daily summary of the latest news and analysts' ratings for Chewy and related companies with MarketBeat.com's FREE daily email newsletter.

Complete the form below to receive the latest headlines and analysts' recommendations for Chewy with our free daily email newsletter: