Beyond Meat (BYND) Scheduled to Post Quarterly Earnings on Thursday

Beyond Meat (NASDAQ:BYND) is set to issue its quarterly earnings data after the market closes on Thursday, May 6th. Analysts expect the company to announce earnings of ($0.27) per share for the quarter. Persons interested in participating in the company’s earnings conference call can do so using this link.

Beyond Meat (NASDAQ:BYND) last issued its quarterly earnings data on Wednesday, February 24th. The company reported ($0.34) earnings per share for the quarter, missing the Zacks’ consensus estimate of ($0.13) by ($0.21). Beyond Meat had a negative return on equity of 4.49% and a negative net margin of 6.97%. The business had revenue of $101.94 million during the quarter, compared to the consensus estimate of $101.48 million. During the same quarter in the prior year, the business posted ($0.01) earnings per share. On average, analysts expect Beyond Meat to post $0 EPS for the current fiscal year and $0 EPS for the next fiscal year.

Several equities research analysts have recently commented on BYND shares. Stephens began coverage on shares of Beyond Meat in a research report on Wednesday, March 24th. They issued an “overweight” rating and a $190.00 target price for the company. Piper Sandler downgraded Beyond Meat from an “overweight” rating to a “neutral” rating and reduced their target price for the stock from $144.00 to $125.00 in a report on Tuesday, January 5th. JPMorgan Chase & Co. dropped their price target on Beyond Meat from $94.00 to $91.00 and set an “underweight” rating on the stock in a research report on Monday, March 22nd. BTIG Research downgraded Beyond Meat from a “buy” rating to a “neutral” rating in a report on Wednesday, January 20th. Finally, Citigroup raised Beyond Meat from a “neutral” rating to a “buy” rating in a research report on Monday, March 8th. Nine research analysts have rated the stock with a sell rating, eight have given a hold rating and three have issued a buy rating to the company’s stock. The stock presently has a consensus rating of “Hold” and an average target price of $122.63. 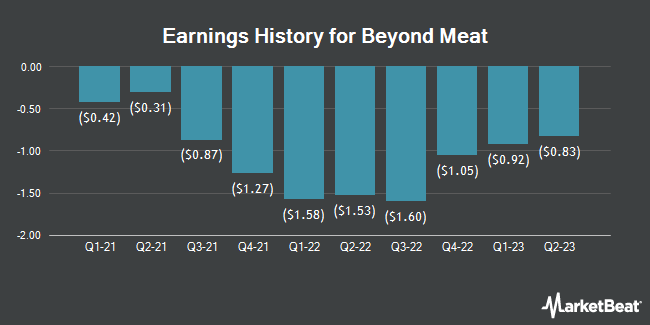