UBS Asset Management Americas Inc. reduced its position in Commvault Systems, Inc. (NASDAQ:CVLT) by 1.2% in the 4th quarter, according to the company in its most recent disclosure with the Securities and Exchange Commission (SEC). The firm owned 48,850 shares of the software maker’s stock after selling 581 shares during the quarter. UBS Asset Management Americas Inc. owned approximately 0.10% of Commvault Systems worth $2,705,000 at the end of the most recent quarter.

Commvault Systems (NASDAQ:CVLT) last released its earnings results on Tuesday, January 26th. The software maker reported $0.57 EPS for the quarter, beating the Thomson Reuters’ consensus estimate of $0.47 by $0.10. The firm had revenue of $188.00 million for the quarter, compared to analysts’ expectations of $175.57 million. Commvault Systems had a positive return on equity of 4.52% and a negative net margin of 4.47%. The business’s quarterly revenue was up 6.6% compared to the same quarter last year. During the same quarter in the previous year, the business posted $0.47 EPS. Sell-side analysts forecast that Commvault Systems, Inc. will post 0.7 earnings per share for the current fiscal year.

Further Reading: What is the QQQ ETF?

Want to see what other hedge funds are holding CVLT? Visit HoldingsChannel.com to get the latest 13F filings and insider trades for Commvault Systems, Inc. (NASDAQ:CVLT). 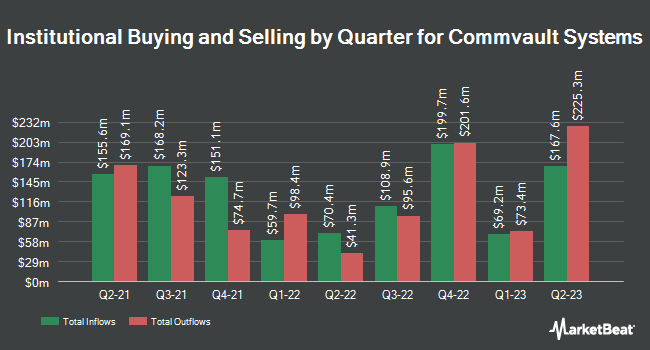 Complete the form below to receive the latest headlines and analysts' recommendations for Commvault Systems with our free daily email newsletter: