Riverview Trust Co trimmed its stake in Darden Restaurants, Inc. (NYSE:DRI) by 6.8% during the first quarter, according to its most recent disclosure with the SEC. The fund owned 1,938 shares of the restaurant operator’s stock after selling 141 shares during the quarter. Riverview Trust Co’s holdings in Darden Restaurants were worth $275,000 as of its most recent SEC filing.

Darden Restaurants (NYSE:DRI) last released its earnings results on Wednesday, March 24th. The restaurant operator reported $0.98 earnings per share (EPS) for the quarter, beating the Zacks’ consensus estimate of $0.69 by $0.29. Darden Restaurants had a positive return on equity of 10.47% and a negative net margin of 1.70%. The company had revenue of $1.73 billion during the quarter, compared to analyst estimates of $1.60 billion. During the same quarter in the prior year, the company earned $1.90 earnings per share. The company’s revenue for the quarter was down 26.1% on a year-over-year basis. As a group, sell-side analysts predict that Darden Restaurants, Inc. will post 3.3 EPS for the current fiscal year.

The firm also recently disclosed a quarterly dividend, which will be paid on Monday, May 3rd. Shareholders of record on Friday, April 9th will be given a dividend of $0.88 per share. The ex-dividend date is Thursday, April 8th. This is a positive change from Darden Restaurants’s previous quarterly dividend of $0.37. This represents a $3.52 dividend on an annualized basis and a yield of 2.48%. Darden Restaurants’s dividend payout ratio (DPR) is presently 112.46%.

Darden Restaurants, Inc, through its subsidiaries, owns and operates full-service restaurants in the United States and Canada. As of May 31, 2020, it owned and operated approximately 1,804 restaurants, which included 868 under the Olive Garden, 522 under the LongHorn Steakhouse, 165 under the Cheddar's Scratch Kitchen, 81 under the Yard House, 60 under The Capital Grille, 44 under the Seasons 52, 41 under the Bahama Breeze, and 23 under the Eddie V's Prime Seafood brands.

Want to see what other hedge funds are holding DRI? Visit HoldingsChannel.com to get the latest 13F filings and insider trades for Darden Restaurants, Inc. (NYSE:DRI). 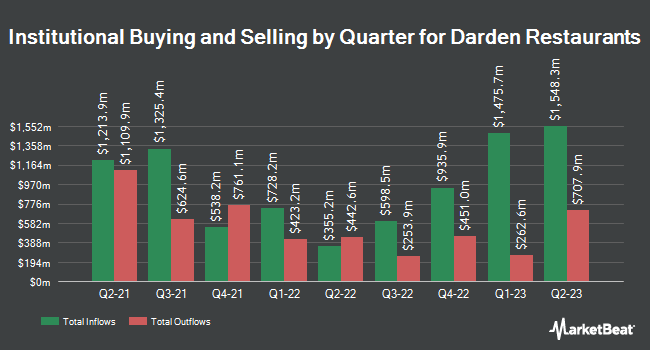 Complete the form below to receive the latest headlines and analysts' recommendations for Darden Restaurants with our free daily email newsletter: