Cimarex Energy (NYSE:XEC) last announced its earnings results on Sunday, February 21st. The oil and gas producer reported $0.89 earnings per share (EPS) for the quarter, topping analysts’ consensus estimates of $0.71 by $0.18. The business had revenue of $434.70 million for the quarter, compared to analyst estimates of $421.94 million. Cimarex Energy had a negative net margin of 104.14% and a positive return on equity of 7.29%. The company’s revenue for the quarter was down 33.9% compared to the same quarter last year. During the same period last year, the firm posted $1.18 earnings per share. Equities analysts forecast that Cimarex Energy Co. will post 0.58 EPS for the current fiscal year.

The firm also recently announced a quarterly dividend, which will be paid on Tuesday, June 1st. Shareholders of record on Friday, May 14th will be issued a $0.27 dividend. The ex-dividend date of this dividend is Thursday, May 13th. This represents a $1.08 dividend on an annualized basis and a yield of 1.73%. This is an increase from Cimarex Energy’s previous quarterly dividend of $0.22. Cimarex Energy’s dividend payout ratio (DPR) is 19.73%.

Cimarex Energy Co operates as an independent oil and gas exploration and production company primarily in Texas, Oklahoma, and New Mexico. As of December 31, 2020, it had a total proved reserves of 531.0 million barrels of oil equivalent; 1.36 trillion cubic feet of proved gas reserves; 144.1 million barrels (MMBbls) of proved oil reserves; and 159.8 MMBbls of natural gas liquids reserves primarily located in the Permian Basin and Mid-Continent regions.

Further Reading: What is a CD ladder?

Want to see what other hedge funds are holding XEC? Visit HoldingsChannel.com to get the latest 13F filings and insider trades for Cimarex Energy Co. (NYSE:XEC). 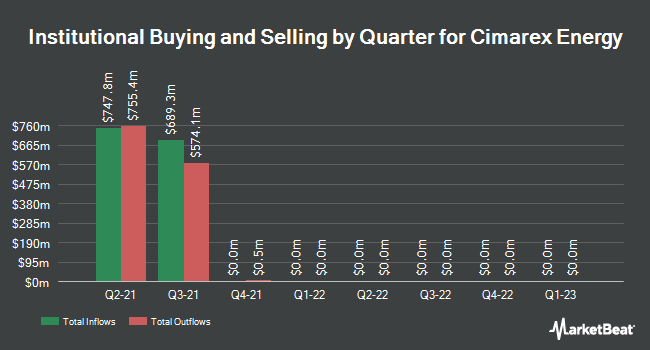 Complete the form below to receive the latest headlines and analysts' recommendations for Cimarex Energy with our free daily email newsletter: