LPL Financial LLC grew its holdings in Badger Meter, Inc. (NYSE:BMI) by 24.7% in the 4th quarter, Holdings Channel.com reports. The fund owned 5,488 shares of the scientific and technical instruments company’s stock after buying an additional 1,087 shares during the period. LPL Financial LLC’s holdings in Badger Meter were worth $516,000 as of its most recent SEC filing.

Badger Meter (NYSE:BMI) last announced its quarterly earnings results on Thursday, January 28th. The scientific and technical instruments company reported $0.45 earnings per share for the quarter, beating the consensus estimate of $0.43 by $0.02. The company had revenue of $112.33 million during the quarter, compared to analysts’ expectations of $107.32 million. Badger Meter had a return on equity of 14.28% and a net margin of 11.53%. Badger Meter’s quarterly revenue was up 4.4% on a year-over-year basis. During the same period last year, the business earned $0.42 earnings per share. Research analysts anticipate that Badger Meter, Inc. will post 1.69 EPS for the current year.

The business also recently declared a quarterly dividend, which was paid on Friday, March 12th. Investors of record on Friday, February 26th were given a dividend of $0.18 per share. This represents a $0.72 annualized dividend and a yield of 0.75%. The ex-dividend date was Thursday, February 25th. Badger Meter’s dividend payout ratio is currently 44.72%.

Several research analysts have recently issued reports on the company. Zacks Investment Research upgraded Badger Meter from a “strong sell” rating to a “hold” rating and set a $100.00 price objective for the company in a research note on Tuesday, March 23rd. Morgan Stanley assumed coverage on Badger Meter in a research note on Wednesday, March 31st. They issued an “underweight” rating and a $95.00 price objective for the company. One analyst has rated the stock with a sell rating, four have given a hold rating and one has given a buy rating to the stock. Badger Meter presently has an average rating of “Hold” and a consensus target price of $77.33.

See Also: What is an investor looking for in an SEC filing?

Want to see what other hedge funds are holding BMI? Visit HoldingsChannel.com to get the latest 13F filings and insider trades for Badger Meter, Inc. (NYSE:BMI). 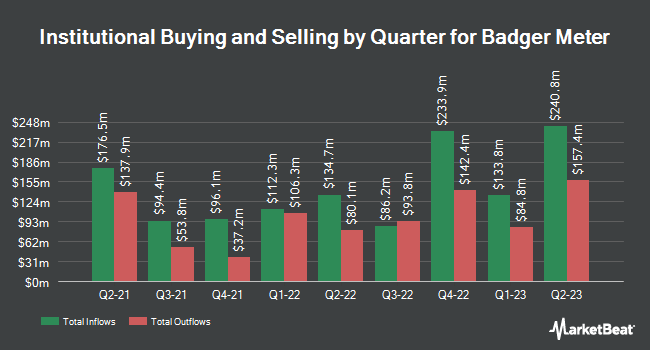 Complete the form below to receive the latest headlines and analysts' recommendations for Badger Meter with our free daily email newsletter: