Wall Street analysts expect that M.D.C. Holdings, Inc. (NYSE:MDC) will report $1.37 earnings per share (EPS) for the current fiscal quarter, according to Zacks. Two analysts have provided estimates for M.D.C.’s earnings, with the highest EPS estimate coming in at $1.46 and the lowest estimate coming in at $1.31. M.D.C. reported earnings of $0.52 per share in the same quarter last year, which would indicate a positive year over year growth rate of 163.5%. The firm is scheduled to issue its next earnings results before the market opens on Thursday, April 29th.

On average, analysts expect that M.D.C. will report full-year earnings of $6.96 per share for the current fiscal year, with EPS estimates ranging from $6.41 to $7.60. For the next fiscal year, analysts expect that the business will report earnings of $7.45 per share, with EPS estimates ranging from $6.59 to $8.38. Zacks’ EPS averages are an average based on a survey of analysts that follow M.D.C..

M.D.C. (NYSE:MDC) last posted its quarterly earnings data on Tuesday, February 2nd. The construction company reported $2.19 earnings per share (EPS) for the quarter, beating the Zacks’ consensus estimate of $1.73 by $0.46. M.D.C. had a net margin of 8.27% and a return on equity of 16.78%. The company had revenue of $1.18 billion for the quarter, compared to the consensus estimate of $1.21 billion. During the same period last year, the company earned $1.42 earnings per share. The firm’s revenue was up 9.9% compared to the same quarter last year.

M.DC Holdings, Inc, through its subsidiaries, engages in the homebuilding and financial service businesses. Its homebuilding operations include purchasing finished lots or developing lots for the construction and sale primarily of single-family detached homes to first-time and first-time move-up homebuyers under the Richmond American Homes name.

Get a free copy of the Zacks research report on M.D.C. (MDC) 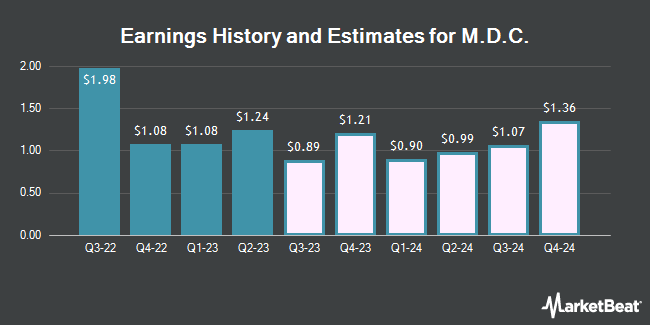 Receive News & Ratings for M.D.C. Daily - Enter your email address below to receive a concise daily summary of the latest news and analysts' ratings for M.D.C. and related companies with MarketBeat.com's FREE daily email newsletter.

Nano Dimension Shares Gap Up to $7.39

Nano Dimension Shares Gap Up to $7.39

Complete the form below to receive the latest headlines and analysts' recommendations for M.D.C. with our free daily email newsletter: