Endesa (OTCMKTS:ELEZY)‘s stock had its “buy” rating reissued by equities research analysts at UBS Group in a report issued on Thursday, The Fly reports.

Several other research firms have also recently issued reports on ELEZY. Barclays raised shares of Endesa from an “equal weight” rating to an “overweight” rating in a research note on Tuesday, January 12th. The Goldman Sachs Group upgraded shares of Endesa from a “neutral” rating to a “buy” rating in a research report on Tuesday, February 9th. Finally, JPMorgan Chase & Co. restated a “neutral” rating on shares of Endesa in a report on Tuesday, March 30th. One equities research analyst has rated the stock with a sell rating, three have given a hold rating and four have issued a buy rating to the company. The stock presently has a consensus rating of “Hold”.

Endesa, SA engages in the generation, distribution, and sale of electricity primarily in Spain and Portugal. The company generates electricity from various energy sources, such as hydroelectric, nuclear, thermal, wind, and solar. As of December 31, 2020, its distributed electricity to approximately 21 million populations covering a total area of approximately 195,488 square kilometers.

Recommended Story: What are the risks of holding treasury bonds? 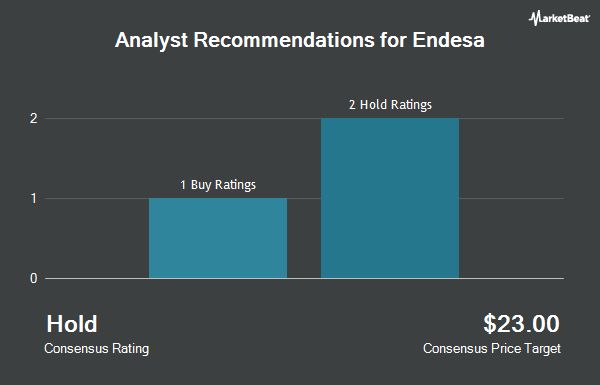 Receive News & Ratings for Endesa Daily - Enter your email address below to receive a concise daily summary of the latest news and analysts' ratings for Endesa and related companies with MarketBeat.com's FREE daily email newsletter.

Complete the form below to receive the latest headlines and analysts' recommendations for Endesa with our free daily email newsletter: