Ontrak, Inc. (NASDAQ:OTRK) Given Consensus Recommendation of “Buy” by Analysts

Shares of Ontrak, Inc. (NASDAQ:OTRK) have earned a consensus rating of “Buy” from the six brokerages that are presently covering the stock, Marketbeat reports. One research analyst has rated the stock with a sell rating and four have given a buy rating to the company. The average 1-year price target among brokers that have issued ratings on the stock in the last year is $82.00.

A number of equities research analysts recently issued reports on OTRK shares. Zacks Investment Research downgraded shares of Ontrak from a “hold” rating to a “strong sell” rating in a research note on Wednesday, January 20th. B. Riley upped their target price on shares of Ontrak from $100.00 to $110.00 and gave the company a “buy” rating in a research report on Monday, January 4th.

Ontrak, Inc operates as an artificial intelligence powered, virtualized outpatient healthcare treatment company that provides in-person or telehealth intervention services to health plans and other third-party payors. Its Ontrak PRE (Predict-Recommend-Engage) platform predicts people whose chronic disease will improve with behavior change, recommends care pathways that people are willing to follow, and engages people who aren't getting the care they need.

Featured Story: How Investors Can Profit from Options Trading 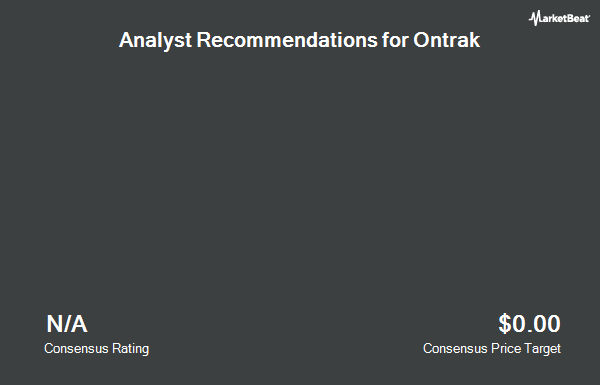 Receive News & Ratings for Ontrak Daily - Enter your email address below to receive a concise daily summary of the latest news and analysts' ratings for Ontrak and related companies with MarketBeat.com's FREE daily email newsletter.

Complete the form below to receive the latest headlines and analysts' recommendations for Ontrak with our free daily email newsletter: