Enter your email address below to get the latest news and analysts' ratings for Smartsheet with our FREE daily email newsletter:

Shares of Smartsheet Inc (NYSE:SMAR) have received an average recommendation of “Buy” from the eighteen ratings firms that are covering the firm, MarketBeat reports. Five analysts have rated the stock with a hold rating and twelve have given a buy rating to the company. The average 1-year target price among brokerages that have updated their coverage on the stock in the last year is $53.18.

Smartsheet (NYSE:SMAR) last issued its earnings results on Wednesday, June 3rd. The company reported ($0.11) earnings per share for the quarter, topping the Zacks’ consensus estimate of ($0.19) by $0.08. The business had revenue of $85.50 million during the quarter, compared to analyst estimates of $81.40 million. Smartsheet had a negative return on equity of 19.19% and a negative net margin of 34.62%. Smartsheet’s revenue was up 52.1% on a year-over-year basis. During the same quarter in the previous year, the firm earned ($0.12) EPS. On average, equities analysts forecast that Smartsheet will post -1.14 EPS for the current fiscal year.

Smartsheet, Inc engages in managing and automating collaborative work. Its platform provides solutions that eliminate the obstacles to capturing information, including a familiar and intuitive spreadsheet interface as well as easily customizable forms. The company was founded by W. Eric Browne, Maria Colacurcio, John D. 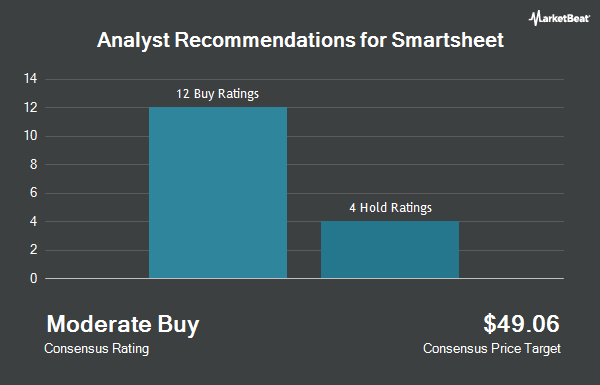