Enter your email address below to get the latest news and analysts' ratings for Littelfuse with our FREE daily email newsletter:

Littelfuse, Inc. (NASDAQ:LFUS) Director William P. Noglows sold 623 shares of the business’s stock in a transaction that occurred on Wednesday, February 12th. The stock was sold at an average price of $185.71, for a total value of $115,697.33. Following the transaction, the director now directly owns 24,307 shares in the company, valued at $4,514,052.97. The transaction was disclosed in a legal filing with the SEC, which is accessible through this link.

Littelfuse (NASDAQ:LFUS) last posted its quarterly earnings data on Wednesday, January 29th. The technology company reported $1.17 earnings per share (EPS) for the quarter, topping the consensus estimate of $1.15 by $0.02. Littelfuse had a return on equity of 11.32% and a net margin of 9.25%. The company had revenue of $338.50 million for the quarter, compared to the consensus estimate of $340.40 million. During the same period in the previous year, the business earned $1.87 EPS. Littelfuse’s revenue for the quarter was down 15.9% compared to the same quarter last year. As a group, sell-side analysts anticipate that Littelfuse, Inc. will post 6.77 EPS for the current year.

The firm also recently disclosed a quarterly dividend, which will be paid on Thursday, March 5th. Shareholders of record on Thursday, February 20th will be issued a dividend of $0.48 per share. The ex-dividend date of this dividend is Wednesday, February 19th. This represents a $1.92 annualized dividend and a yield of 1.04%. Littelfuse’s dividend payout ratio is presently 28.15%.

Featured Story: If I purchase shares through a brokerage account, am I the holder of record? 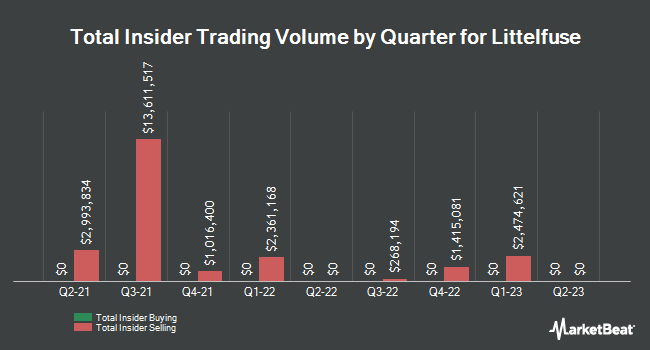