Enter your email address below to get the latest news and analysts' ratings for Medtronic with our FREE daily email newsletter:

Medtronic PLC (NYSE:MDT) has received a consensus rating of “Buy” from the twenty-four brokerages that are presently covering the company, MarketBeat Ratings reports. Six equities research analysts have rated the stock with a hold recommendation and eighteen have given a buy recommendation to the company. The average 12-month price objective among brokers that have updated their coverage on the stock in the last year is $121.52.

Medtronic (NYSE:MDT) last issued its quarterly earnings data on Tuesday, November 19th. The medical technology company reported $1.31 earnings per share for the quarter, beating the consensus estimate of $1.28 by $0.03. The firm had revenue of $7.71 billion for the quarter, compared to analyst estimates of $7.66 billion. Medtronic had a net margin of 15.11% and a return on equity of 14.52%. The company’s revenue for the quarter was up 3.0% on a year-over-year basis. During the same quarter last year, the firm earned $1.22 earnings per share. On average, analysts predict that Medtronic will post 5.6 EPS for the current year.

The company also recently disclosed a quarterly dividend, which was paid on Friday, January 17th. Investors of record on Friday, December 27th were issued a dividend of $0.54 per share. This represents a $2.16 annualized dividend and a dividend yield of 1.81%. The ex-dividend date was Thursday, December 26th. Medtronic’s dividend payout ratio is currently 41.38%.

Featured Article: What is the Consumer Price Index (CPI)? 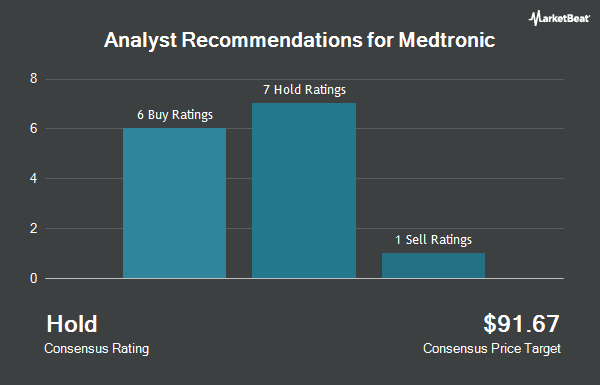