Beyond Meat - Get News & Ratings Daily

Enter your email address below to get the latest news and analysts' ratings for Beyond Meat with our FREE daily email newsletter:

Beyond Meat (NASDAQ:BYND) last posted its quarterly earnings data on Monday, October 28th. The company reported $0.06 EPS for the quarter, beating analysts’ consensus estimates of $0.05 by $0.01. The business had revenue of $91.96 million for the quarter, compared to analyst estimates of $83.35 million. Beyond Meat had a negative return on equity of 5.92% and a negative net margin of 8.42%. The company’s revenue was up 250.0% on a year-over-year basis.

Beyond Meat, Inc, a food company, manufactures, markets, and sells plant-based meat products in the United States and internationally. The company sells its products under the Beyond Beef, Beyond Chicken, The Beyond Burger, Beyond Meat, Beyond Sausage, Eat What You Love, and The Cookout Classic brand names. 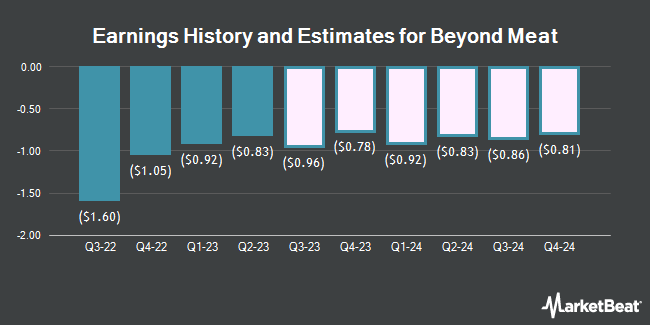