Enter your email address below to get the latest news and analysts' ratings for Silicon Laboratories with our FREE daily email newsletter:

Silicon Laboratories (NASDAQ:SLAB) is scheduled to be releasing its earnings data before the market opens on Wednesday, January 29th. Analysts expect the company to announce earnings of $0.63 per share for the quarter. Investors that wish to register for the company’s conference call can do so using this link.

Silicon Laboratories (NASDAQ:SLAB) last released its quarterly earnings data on Wednesday, October 23rd. The semiconductor company reported $0.96 EPS for the quarter, beating analysts’ consensus estimates of $0.84 by $0.12. Silicon Laboratories had a return on equity of 9.33% and a net margin of 2.96%. The business had revenue of $223.30 million during the quarter, compared to the consensus estimate of $217.97 million. During the same quarter in the prior year, the company posted $1.01 earnings per share. The firm’s revenue was down 3.0% on a year-over-year basis. On average, analysts expect Silicon Laboratories to post $2 EPS for the current fiscal year and $2 EPS for the next fiscal year.

Read More: What is a Derivative? 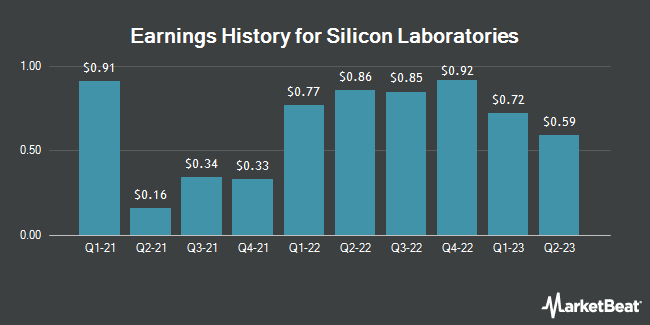 Next »
Scotts Miracle-Gro (SMG) Scheduled to Post Earnings on Wednesday