Enter your email address below to get the latest news and analysts' ratings for Chembio Diagnostics with our FREE daily email newsletter:

Ingalls & Snyder LLC raised its position in Chembio Diagnostics Inc (NASDAQ:CEMI) by 2.0% in the 4th quarter, according to its most recent filing with the SEC. The firm owned 309,244 shares of the company’s stock after acquiring an additional 6,000 shares during the period. Ingalls & Snyder LLC owned approximately 1.76% of Chembio Diagnostics worth $1,410,000 at the end of the most recent reporting period.

Separately, ValuEngine upgraded shares of Chembio Diagnostics from a “hold” rating to a “buy” rating in a research note on Tuesday, January 7th.

In related news, Director John Gary Potthoff purchased 10,000 shares of the business’s stock in a transaction dated Monday, November 11th. The stock was acquired at an average price of $4.44 per share, for a total transaction of $44,400.00. Following the acquisition, the director now directly owns 37,772 shares of the company’s stock, valued at approximately $167,707.68. The transaction was disclosed in a legal filing with the SEC, which can be accessed through the SEC website. Company insiders own 4.90% of the company’s stock. 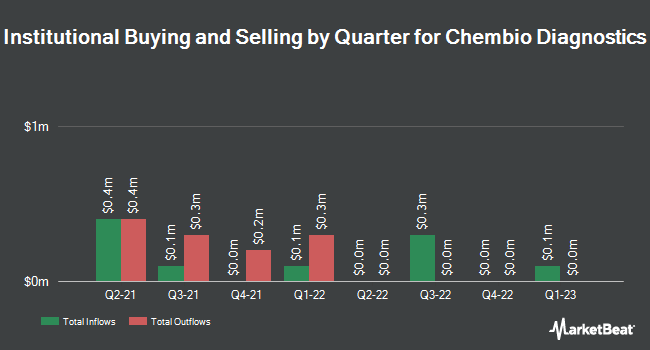