Enter your email address below to get the latest news and analysts' ratings for XBiotech with our FREE daily email newsletter:

-$0.15 Earnings Per Share Expected for XBiotech Inc (NASDAQ:XBIT) This Quarter

Brokerages predict that XBiotech Inc (NASDAQ:XBIT) will report earnings per share (EPS) of ($0.15) for the current quarter, Zacks Investment Research reports. Zero analysts have made estimates for XBiotech’s earnings. XBiotech posted earnings of ($0.17) per share during the same quarter last year, which indicates a positive year-over-year growth rate of 11.8%. The company is expected to issue its next quarterly earnings results on Wednesday, March 11th.

On average, analysts expect that XBiotech will report full-year earnings of ($0.62) per share for the current year. For the next year, analysts anticipate that the business will report earnings of $0.23 per share. Zacks’ earnings per share calculations are a mean average based on a survey of sell-side research firms that follow XBiotech.

XBiotech Inc, a pre-market biopharmaceutical company, engages in discovering and developing True Human monoclonal antibodies for treating various diseases. The company's lead product is bermekimab, a therapeutic antibody that neutralizes interleukin-1 alpha, which has completed Phase III clinical trial in Europe for the treatment of symptomatic and advanced colorectal cancer.

See Also: What is a resistance level? 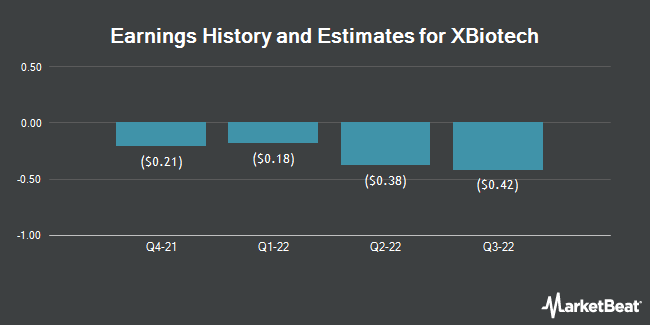 Receive News & Ratings for XBiotech Daily - Enter your email address below to receive a concise daily summary of the latest news and analysts' ratings for XBiotech and related companies with MarketBeat.com's FREE daily email newsletter.

Next »
Analysts Expect FreightCar America, Inc. (NASDAQ:RAIL) Will Announce Earnings of -$0.62 Per Share