Enter your email address below to get the latest news and analysts' ratings for Briggs & Stratton with our FREE daily email newsletter:

Wall Street analysts forecast that Briggs & Stratton Co. (NYSE:BGG) will announce sales of $454.23 million for the current quarter, Zacks reports. Three analysts have issued estimates for Briggs & Stratton’s earnings. The lowest sales estimate is $453.00 million and the highest is $454.90 million. Briggs & Stratton reported sales of $505.46 million during the same quarter last year, which indicates a negative year-over-year growth rate of 10.1%. The firm is scheduled to announce its next quarterly earnings report on Wednesday, January 22nd.

According to Zacks, analysts expect that Briggs & Stratton will report full-year sales of $1.90 billion for the current fiscal year. For the next fiscal year, analysts forecast that the firm will post sales of $1.96 billion, with estimates ranging from $1.96 billion to $1.97 billion. Zacks’ sales averages are an average based on a survey of research firms that cover Briggs & Stratton.

Briggs & Stratton (NYSE:BGG) last announced its quarterly earnings results on Friday, November 1st. The industrial products company reported ($0.67) earnings per share (EPS) for the quarter, topping analysts’ consensus estimates of ($0.73) by $0.06. The business had revenue of $313.70 million for the quarter, compared to analyst estimates of $291.14 million. Briggs & Stratton had a negative net margin of 2.50% and a negative return on equity of 4.18%. The company’s revenue was up 12.4% on a year-over-year basis. During the same quarter last year, the firm earned ($0.51) EPS.

In other news, VP Jeffrey Michael Zeiler bought 15,112 shares of the firm’s stock in a transaction on Thursday, September 12th. The stock was acquired at an average cost of $6.31 per share, with a total value of $95,356.72. Following the completion of the acquisition, the vice president now owns 90,195 shares of the company’s stock, valued at $569,130.45. The transaction was disclosed in a document filed with the SEC, which is available through this hyperlink. 7.60% of the stock is currently owned by insiders.

Featured Article: What is total return in investing? 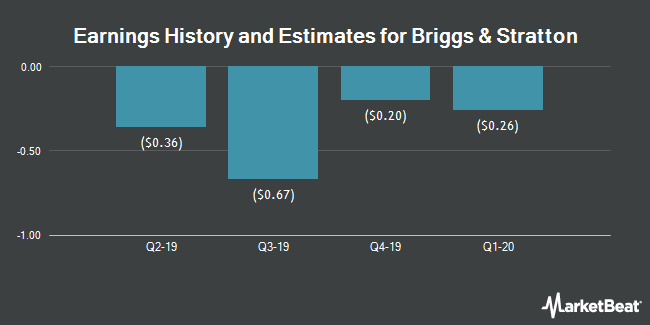