AMG National Trust Bank raised its holdings in Royal Bank of Canada (NYSE:RY – Get Rating) (TSE:RY) by 27.6% during the 3rd quarter, according to its most recent filing with the Securities and Exchange Commission. The fund owned 22,220 shares of the financial services provider’s stock after buying an additional 4,800 shares during the period. AMG National Trust Bank’s holdings in Royal Bank of Canada were worth $2,001,000 at the end of the most recent reporting period.

The business also recently declared a quarterly dividend, which will be paid on Friday, February 24th. Stockholders of record on Thursday, January 26th will be paid a $0.9832 dividend. The ex-dividend date is Wednesday, January 25th. This represents a $3.93 dividend on an annualized basis and a dividend yield of 3.91%. Royal Bank of Canada’s payout ratio is currently 43.02%.

About Royal Bank of Canada

Want to see what other hedge funds are holding RY? Visit HoldingsChannel.com to get the latest 13F filings and insider trades for Royal Bank of Canada (NYSE:RY – Get Rating) (TSE:RY). 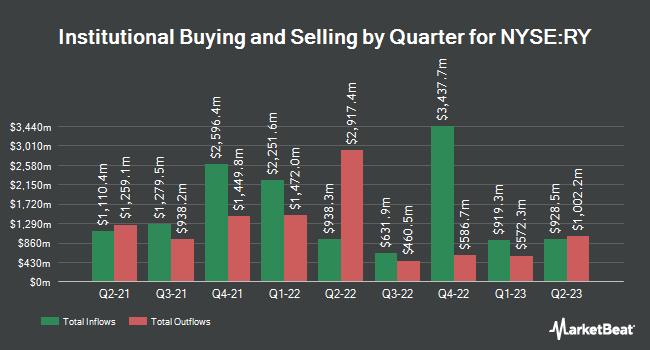 Complete the form below to receive the latest headlines and analysts' recommendations for Royal Bank of Canada with our free daily email newsletter: