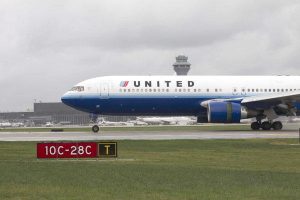 On Tuesday, United Airlines posted a drop of 52% in its net earnings for its fourth quarter, but the air carrier met expectations on Wall Street thanks to better than had been expected bookings during both November and December.

The airline, based in Chicago, posted net income of $397 million for its October through December quarter. That was down from one year ago during the same quarter when income was $823 million, but at that time fuel prices were even lower than now, which helped to spike profits.

Earnings were $1.26 per diluted share, which met estimates on Wall Street.

One airline analyst kept his strong buy recommendation on United stock due to the airline being headed upward.

The quarterly results saw revenue reach close to $9 billion, which represented a gain of 0.2% from the same period one year ago, but the airlines expenses increased even more as they were up more than 1.2% to over $8 billion.

Fuel costs fell by 3.9% to just over $1.6 billion during the three-month period. However, salaries were up for the same period by 5.9% to close to $2.6 billion.

Labor agreements were reached by the airline with each of its different domestic unions over the course of the full year. Workers received profit sharing of more than $628 million during 2016.

An important metric for performance, passenger revenue per available seat mile, dropped by 1.6% for the three months due to the U.S. dollar remaining strong, lower overall surcharges and reductions in travel related to energy.

However, the overall results outperformed the airlines earlier guidance due to strong bookings as well as yields during the months of November as well as December.

Scott Kirby the United president said in a prepared statement that the airline saw strong improvement in pricing and demand during the most recent quarter.

Officials from United promoted an on-time performance that was its best and the lowest amount of cancellations as well as mishandled bags for the company in its history, during 2016.

Oscar Munoz the CEO at United said in another prepared statement that the operating and financial performance for the fourth quarter had capped an impressive year for the air carrier.

Airlines have seen profits increase the past two years thanks to oil prices being lower, but will see some of that drop due to the price of oil increasing slightly the past quarter.